A Book for the Beach: American Priestess

I've been hanging out in Manhattan these past three weeks and, a brief respite from Israel, loving it. Of course, what do I read in this downtime? American Priestess, the fabulous nonfiction account of a messianic Christian group that landed in Jerusalem in the late 1800s and, in due course, founded one of the city's most famous hotels, The American Colony. It is a highly recommended read for the beach. Here's a brief synopsis of why I couldn't put it down.

Jerusalem is a city of extremes—extreme religion, history, and emotion. Jerusalem can drive people insane, literally. There is a rare psychosis associated with the city known as Jerusalem Syndrome involving the presence of religiously themed obsessive ideas or delusions that are triggered by Jerusalem or compel its victims to go to the city. Every year tens of visitors are affected. The afflicted have been found wandering in the Judean desert wrapped in hotel bed sheets or crouched at the Church of the Holy Sepulcher, waiting to birth the infant Jesus. The syndrome can affect seemingly normal people as well as those already suffering from mental illness. In extreme cases, the affected Pilgrims who, in some cases, belong to bizarre fringe groups rather than regular churches, believe they must do specific things to bring about major events like the coming of the Messiah, the war of Armageddon, or the resurrection of Jesus Christ.

Which brings me to the fabulous book I just mentioned—American Priestess by Jane Fletcher Geniesse. American Priestess follows the remarkable true story of Anna Spafford from her arrival in Chicago from Norway at the age of four in 1846 to her early years and marriage at age eighteen to Horatio Spafford, the loss of four of her children at sea, to her and her husband’s eventual emigration to Jerusalem in 1881. It also follows her transformation from a seemingly ordinary housewife into the leader of a messianic Christian quasi-cult known as the American Colony. In the course of her story, Anna not only lost four of her daughters to shipwreck and a son to fever, but also she and her followers endured plagues, war, and starvation, living through some of Jerusalem’s most turbulent periods as it changed hands from Ottoman to British to Jewish.

Anna Spafford (born Anne Tobine ALarsdatter Oglende in Norway), interestingly, was not always religious. Like all her peers of that period, she regularly attended church and was nominally Presbyterian. It was at bible study when she was just fifteen that she first met Horatio, who was leading the study and would later become her husband when she reached eighteen. Their life together seemed charmed. They had four girls in rapid succession, Horatio’s law practice gave him good income and prestige in the community. But after a tragic fire destroyed much of Chicago in 1871 and nationwide financial collapse several land deals in which Horatio invested, the Spaffords were left destitute. Horatio had long been evangelical and, like many of his time, believed the Second Coming eminent. It was during this period that he and Anna began their own sect called the Saints (or the Overcomers) and founded a church beside their home.

At the same time, Horatio was stealing money he was entrusted with investing and was one step ahead of bill collectors. It was in front of this additional calamity that he sent his wife and four children to France via ship. He was to join them later. Tragedy struck again when another ship ran into theirs on the way, and all four of the Spafford daughters were lost.

After all these traumas, Horatio ‘received’ communication from God that he and his followers must emigrate to Jerusalem to await the Second Coming. A band of eighteen, including two Spafford daughters born in the interim, arrived in Jerusalem in 1881 where they rented and later purchased a large house, later hotel, on the eastern outskirts of Jerusalem. Others from Chicago and from Sweden and Norway followed. Horatio initially was the leader, however, when he died in 1888, Anna took the reins. By definition, the American Colony of Geniesse’s book was a cult. Members received unconditional love, acceptance, and attention from a charismatic leader, in this case, from Anna Spafford, assuming they obeyed her commands; members received new names and often new professions; members were isolated from friends, relatives, and mainstream culture; and access to information was severely controlled. American Colony members ceded not only all financial resources to the group, but also their husbands and wives, children, autonomy. Marriages were dissolved, celibacy instituted, parents and children separated. Later, marriage was re-instituted though Anna (aka the Priestess) decided who married whom. Only Anna’s two surviving daughters, Bertha and Grace, received full education.

Certainly the beliefs or practices of the American Colony members were considered strange by outsiders and several American consuls complained to their American counterparts in the US about the group. While they considered themselves Christian, they considered most mainstream Christian churches tepid and disowned them. The group arrived in Jerusalem anticipating the eminent second arrival of the Messiah. Anna, aka The Priestess, was apparently in direct communication with God about this and her band, according to her messages, had been chosen to receive him. Like some other messianic Christian groups, the American Colony believed the Jews return to the Holy Land presaged the Second Coming and, unlike Arab residents of the city, welcomed the Jewish immigrations of the early 1900s. At the same time, the Overcomers fed the city’s poor, treated the sick even when exposure risked their own health, and, during the many periods of war, maintained hospitals and treated soldiers from all sides of the fighting.

Peppering the book with quotes from the descendents of the American Colony as well as from letters, books, documents from the period, Genniese recreates in real time the period between 1880 when the American Colony was founded and 1950 when the Colony disbanded. There is an immediacy to American Priestess which is due not only to Geniesse’s extensive research (the book apparently took seven years to research and write) but also because the Jerusalem of the late 19th century feels current. The political and religious frictions about which Geniesse writes and through which the American Colony lived continue, between Arab and Jew, between easterner and westerner. Jerusalem exists, as it has for millenniums, at a contentious crossroad and its sites are symbols of the religious and cultural aspirations of many peoples. 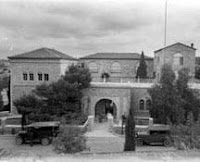 Beyond the historical context, American Priestess reads like a good novel. The characters in the story—Anna, Horatio, their daughters Bertha and Grace, are fleshed-out, three-dimensional. Though I admit I found little attractive about the main characters, their flaws made them real and intriguing. I also found the periods through which the American Colony lived fascinating. They survived two World Wars, multiple skirmishes, battling against and sometimes aligning with the various powers controlling Jerusalem’s gates. I admit also some personal connection with the story given that I live in Israel and am an immigrant from the US. While I feel little in the way of alignment with Anna Spafford’s motivations, I sometimes felt I understood her and her family. Whether one calls it Jerusalem Syndrome or spiritual conviction, the power of Jerusalem as symbol and destination remains. The American Colony still exists, literally as a five-star hotel just outside the Old City borders and symbolically in the mind of those searching for their particular brand of salvation.

By the way, if you want to see how the current management of The American Colony Hotel spins this story, check out their website.
Posted by Sarah Wetzel Fishman at 5:32 PM No comments: