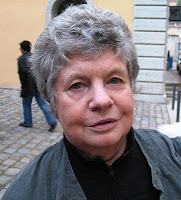 At this week's Edinburgh international book festival, author (most recently of The Children's Book) AS Byatt gave a fascinating interview. Byatt, an atheist, in talking about social realism in fiction said, “Most people who are talking about reality don’t understand how difficult it is to say what reality is.” She goes on to say that part of the issue is that “religion has gone away.” “A kind of map of the world that was provided by Christian belief or by other forms of religious belief, has for most ordinary people in the society I live in, disappeared. This means how you say who you are has become very difficult. There are novels to be written in the future about the very careful tactics with which we choose how to describe our sense of ourselves.”

I found Byatt’s thoughts evocative as I also believe that many people, especially secular people and including me, grapple with how to understand their own nature in the absence of God’s salvation. To some degree I think it is a debate between determinism and free will. How much do we believe that our life, our fate, hinges on our own choices and how much is determined by an environment beyond our control? There are various versions of this from Freud’s role of the unconscious, Jung’s archetypes, Skinner’s conditioning, evolutionary psychology, to Sartre’s atheistic existentialism. The truth lies perhaps in the synthesis of some of these opposing views.

I do think contemporary literature even now is at the forefront in regards to the dilemma of how we describe ourselves. Authors as diverse as Orhan Pamuk, Amos Oz, Don DeLillo, Arundhati Roy come to mind where it is often the confrontation between religion/culture and materialism that serves as backdrop for the definition of the individual self in their stories.

I do wholeheartedly agree that media, the Internet, social networks are adding new layers of complexity (and interest) to the debate. Moreover, new web technologies (and the ever-increasing availability of information) have made possible a new kind of writing. This prose uses fact and randomness rather than story and structure. David Shields and Anders Monson and Maggie Nelson are examples of authors integrating these factors into their literature. Though in the end, as AS Byatt says, in the absence of religion, all we are left with is ourselves. I’m hopeful though that this will be enough. Anyway, check out the interview. Byatt is not afraid to speak her mind and hers is definitely an interesting one.
Posted by Sarah Wetzel Fishman at 4:38 PM No comments:

Too Ignorant to Ignore!

I rarely post regarding political issues, but this is just too crazy not to comment on. Poetically crazy perhaps.

Apparently nearly one in five people in the US, or 18 percent, believe Obama is Muslim. That was up from 11 percent who said so in March 2009. The survey also showed that just 34 percent said Obama is Christian, down from 48 percent who said so last year. The largest share of people, 43 percent, said they don't know his religion.

I will try to believe those figures illustrate American gullibility to right wing propaganda, tendency toward confirmation bias (i.e., they always suspected it!), rather than complete and utter ignorance.

Of course, many Israelis I speak with (and most of them well educated) also believe Obama is Muslim. No stats here, but I actually believe the percentage might be higher. So ignorance extends beyond America's shores.

Many of these people dislike Obama for other reasons (political party, race, and even a few for his policies). On the Israeli side, the dislike is rooted in his refusal to provide blanket support for all Israeli policies. That they equate this dislike with being Muslim, I suspect, also reflects innate bigotry on their part regarding the Islamic faith. I.e., UnAmerican = Muslim or AntiIsraeli = Muslim.

Anyway, just for the record, Barack Obama is a Christian, and announced in June 2009 that his primary place of worship would be the Evergreen Chapel at Camp David. Merely attending school that is nominally Muslim in Indonesia does not make one Muslim. FYI, in Indonesia, Obama attended a Catholic school for two years (ages 6-8) and then a public school for two years (ages 8-10); in an interview, the head of the Indonesian public school said they are secular and have Christian, Buddhist, and Muslim students. To be considered a Muslim by the community, there must be an adult profession of faith, the recitation of the shahadah (declaration of faith) and that must be done with adult Muslims present. Barack Obama has not met these conditions, thus he is not a Muslim. Furthermore, he’s been baptized and regularly attended church his entire life, was married in a Christian ceremony, raises his kids as Christians, and he continues to confess his faith in Jesus Christ as his savior, which no Muslim will ever profess. And I certainly think the intensive news coverage would have picked up if Obama had performed any Muslim practices.
Posted by Sarah Wetzel Fishman at 7:08 AM No comments:

Ronny Someck and the Pleasure of Hebrew 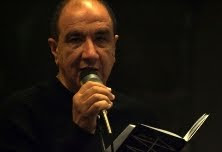 One of the pleasures of learning another language is being able to gather another layer of meaning to the poetry written in that language. A poet I am currently struggling with, both in translation and metaphorically, is Ronny Someck. Someck has published nine (or perhaps ten) books of poetry in Hebrew and hosted a popular radio program in Israel for years. Decades earlier, he was part of a circle called the “Tel Aviv Poets," which included Mier Wieseltier, Yona Wallach, and others, who often wrote about contemporary Israeli street life, incorporating slang, images from television and popular culture into their poems. Their poetry was often fleshy and sexy. Someck's poetry still often is.

Anyway, the reason I bring him up today is that I’m reading some of his work in Hebrew and struggling with the translation. BUT one interesting aspect of Hebrew is that much of the language is built around what they call “binyamin” or buildings so that word groups arise from the same root. For example, “dahm” means blood. From that, we get “Ah-dom” or red, and “Ah-damn” which means man, and from that we get “Ah-dah-ma” meaning earth. Red begets Blood begets Man begets Earth and vice versa.

Here is a poem by Someck titled “Red Catalogue of the Word Sunset:”

A French poet sees a red sunset
and squeezes burgundy from the cloud grapes.
An English poet likens the sunset to a rose
and a Hebrew, to blood.
Oh my country, a land fastening cannibal lips
to the setting sun’s virginal throat,
my arms are oars of fear
and I, in the ark of my life, row
like Noah to Ararat.

It is a unsettling poem comparing Israel to a cannibal that ‘eats its own,' different from more civilized lands where sunsets lead to wine and roses. But what is lost in the translation is the play of the language through the poem. The red of the sunset becomes blood becomes land becomes man. Underlining Someck’s unsaid importance of this resonance to the poem is that these relationships are "seen" by a “Hebrew” poet not an Israeli poet whose language might be Arabic, or given the waves of immigration, English, German, Russian, etc. The Hebrew language becomes part of what makes this land the cannibal that it is (in Someck’s poem). Or as Mier Wieseltier, another Jewish Israeli poet wrote in the poem “A March for Long Distance Poets,” “The believer in what words can do / believes in what they did to him.”
Posted by Sarah Wetzel Fishman at 5:03 AM No comments:

Her Circle Ezine - Kind Enough to Include Me!

Her Circle Ezine is, in their words, an online portal of women's creative arts and activism from around the globe. By celebrating artists and writers whose work addresses the social issues of our time, we strive to bring these issues to the fore, whilst reaffirming connections between art, politics, and life. I've become an enormous fan for the poetry and prose, interviews, and essays, all created by an amazing array of talented writers.

They were lovely enough to ask me to submit a posting to their Writer's Life blog as a Guest Blogger! Take a look. Beyond my brief thoughts, there is a lot to draw you into their site.
Posted by Sarah Wetzel Fishman at 1:56 AM No comments: