Today, a ten-person boat attempted to break Israel’s blockade of Gaza. On board, were Jews from Germany, the US, the UK, Israel who wanted to say, Israel’s policies are not ours. They carried books and school supplies for the Gazan children. Even though the Gazan leader would, if he could, murder every one of Israel’s fathers, every one of its mothers. Because of course the blockade does nothing but reinforce that hatred. Israel towed the small boat into Ashdod, one of its ports, without violence.

The barbarians are all of us.

I am reading Adina Hoffman’s biography of the Palestinian poet Taha Muhammad Ali called “My Happiness Bears No Relation to Happiness.” Hoffman is a Jew living in Jerusalem. Taha Muhammad Ali still lives in Israel. The book is successful in that it recounts one particular man's experiences, his tragedies, and his victories. It speaks of the restorative power of words and of poetry. While I think Hoffman's retelling of the poet's life is seen through a particular lens, the book is beautifully and compassionately written and speaks also, I think, to the possibility of healing. Both of them wish each other well.

If the barbarians are us, so perhaps are the saviors.

Here is a lovely poem by Taha Muhammad Ali.

NEITHER MUSIC,
fame, nor wealth,
not even poetry itself,
could provide consolation
for life’s brevity,
or the fact that King Lear
is a mere eighty pages long and comes to an end,
and for the thought that one might suffer greatly
on account of a rebellious child.
My love for you
is what’s magnificent,
but I, you, and the others,
most likely,
are ordinary people.

My poem
goes beyond poetry
because you
exist
beyond the realm of women.

And so
it has taken me
all of sixty years
to understand
that water is the finest drink,
and bread the most delicious food,
and that art is worthless
unless it plants
a measure of splendor in people’s hearts.

One Year of Sin 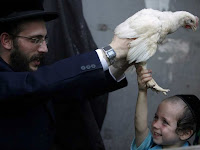 Just a little meditation on Yom Kippur with line breaks...

At dusk, the streets go silent of cars and buses, television
programming blinks out, lawnmowers and leaf blowers
are stowed as the highways empty out, only to slowly fill
with children on bicycles, skaters and skateboarders, their dogs
running alongside, while the parents sit on benches
and chat about the last vacation to Puket or Berlin.
No one is supposed to die on Yom Kippur.

A day earlier, walking our small brown and white dog
through Park Se-adya Shoshani, my husband and I watched
a religious Jew dressed in his black coat and hat wave
what looked from a distance a feathered boa
over the head of a small boy who could not have been more

than three. Closer, I realized the scarf was in fact
a live white chicken. The chicken absorbs the past year’s
bad deeds, my husband said, looking a bit embarrassed. Even
that of a three year old child. The white chickens
are then slaughtered, so that the year’s evil dies with them. 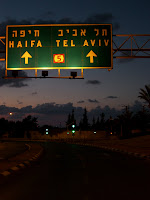 This morning, I sent photos of Ayalon Highway empty
except for pedestrians and bicyclists to a friend, who
can’t believe that no one, I mean no one, drives
the whole day of Yom Kippur. For one day, in Israel,
there is nowhere to drive. In a few hours, the Israelis will
get back in their cars, but right now, I think I hear
the Mediterranean, the sins of the past year cast off.
Posted by Sarah Wetzel Fishman at 12:36 AM No comments:

More on Telling Ourselves Stories

Speaking of history and how our stories change over time, I don't know why but this from Stephen Elliott's almost daily email resounded after yesterday's bout with Israeli confirmation bias...(FYI, unless you subscribe to his email via therumpus.net, you can't see Elliott's email; it's worth the time to subscribe; it's worth the time to hang out on the site (of which Elliott is the editor)):

In our round table yesterday I tried not to say things I've said before, but I failed. It's so easy to fall back on stories you've already told. I remember seeing Lawrence Wechsler and someone asked him about Ryzsard Kapuscinski and whether you were allowed to lie when writing history. Lawrence began to tell this story about Kapuscinski, how when he was writing about Iran he was actually writing about Poland, and Josh whispered to me that it was the same story Lawrence told years ago when Josh took his class at Columbia. And I thought, just answer the fucking question. And now I think you build up the stories, little connections. Occasionally you add a new one, like "I feel like I'm married to someone else's pornographic fantasy" or "honesty is bordered by self-knowledge." The new one goes on top of the pile and when you're asked a question you go to the bin and retrieve the best story you told last time. You tell yourself these stories too and occasionally something big happens, like you fall out of love, or a friend dies, and a whole bunch of these stories, which are really fragile as twigs, snap in half, and you have a lot more room, and you fill the space with more stories, more connections, start again.

I.e., no more 'something big,' no more new stories, perhaps just another way of going senile. The same story over and over.
Posted by Sarah Wetzel Fishman at 9:04 AM No comments:

Oh, how we humans cling to our narratives, refusing to acknowledge that our stories about ourselves, the stories we tell ourselves, might be biased, even untrue. Psychologists call it confirmation bias. We ignore, deliberately and subconsciously, information that contradicts our hypotheses or preconceptions of the world.

Last night this was once again brought home to me in regards to the place I call home, Israel.

Where was I? An English language book club I belong too here in Tel Aviv comprised of women from the US, Canada, Australia, as well as native born Israelis and women from other countries who meet to read and discuss books in English. Last night we met to discuss Alon Hilu’s The House of Rajani. In attendance were about 25 people, primarily women, all of them Jewish with the exception of myself, as well as the author himself.

Translated into English from Hebrew, The House of Rajani tells a late nineteenth century tale of the relationship between a Russian-Jewish immigrant to Israel and a mentally disturbed Arab boy. Hilu uses fictitious diary entries written by both as a means to describe their relationship and provide insight into the two characters. The book has been wildly controversial in Israel because the Jewish man (married) begins an affair with the boy’s lonely mother (also married), and, as irreverent as the affair in that day and age and between a Jew and an Arab, more so is his single minded obsession to purchase/steal the Arab family’s land through fair means or foul. Thus ensues the suspicious death of the boy’s father, the decline into madness of the mother, the assumption of the land by the Jew, his eviction of the land’s long-time Arab tenant farmers. Coloring the goings on are the boy’s prophetic visions, which describe a future war between Jews and Arabs, fiery modern warfare, death to thousands, and the loss of the land including his own to the colonizing Jews.

Interestingly, Hilu attempts to mimic the early Hebrew and Arabic of the time (he reportedly spent a year reading newspapers from the late 1800s), and the translation attempts to replicate the slightly archaic feel of the language. Conversational and contemporary the book is not. But Hilu does capture, at least in my opinion, the smell and color of that turbulent time, and his primary characters are fully fleshed even if there is little to admire in any of them.

The House of Rajani is essentially telling one story of pre-Israel Palestine through the eyes of the ‘other.’ Hilu was vilified in one of Israel’s newspapers and stripped of a prize he had won (The Sapir Prize, which is one of Israel’s largest). Hilu believes the stripping of its prize, and its eventual return, was completely political. Hilu was called anti-Zionist, a self hating Jew, in the press and in the blogosphere. Several journalists, politicians, even academics criticized him publicly.

What is remarkable is not only the public drubbing an author received (in a democracy for God’s sake!) for writing a book of fiction, but the selective memory it represents on the part of Israel. There are innumerable books written, even by Israelis, documenting the thousands displaced by Israel’s War of Independence (the Palestinians call it Naqba, which means catastrophe in Arabic), that the displacement was at times voluntary, at others not, Israel’s destruction of Arab homes and confiscation of lands. There were atrocities, large and small, on both sides and Israel can certainly claim that they did not instigate the war. Moreover, as in all wars, to the victors go the spoils, but that Israel continues to deny its own participation seems, at least to me, at times ludicrous, at times immoral. Instead, the story of Israel, at least for the Jews, is that the Jews arrived to a land virtually empty and, in their hands, it flowered. Like many colonizers, the ‘natives’ were invisible, or rather they became invisible in history’s retelling.

I will say that the book club was civil if at times rancorous. Before Hilu arrived quite a few of the attendees admitted they were not political and in fact had little historical knowledge of what actually transpired. But even these women exhibited a willingness to listen to Hilu, even if they allowed it only as an imaginative work of fiction.

I suppose I draw more comfort that the book has sold 50K copies in Israel (amazing for a country of 7mm, not all of them reading Hebrew) and been translated into seven languages. People are reading it. In my opinion, acknowledging reality is the only way Israel can address the present. Perhaps literature will prove one way that the blindness associated with the country’s confirmation bias can be healed.
Posted by Sarah Wetzel Fishman at 8:15 AM No comments: