Beginning in the early 1950s and continuing into the 1960s, America’s Central Intelligence Agency (CIA) used American modern art - including the works of such artists as Jackson Pollock, Robert Motherwell, Willem de Kooning and Mark Rothko—as a weapon in the Cold War. Sounds crazy, doesn’t it? That’s what I thought too.
Today I spent two hours at New York’s Museum of Modern Art trying to get my tiny arms around the museum’s amazing retrospective of Abstract Expressionism (Ten rooms! Hundreds of paintings!). While there, I got into a great conversation with one of the museum’s docents about AE and it led to the revelation above. I admit that I was skeptical. I’d heard that the US government sent musicians and orchestras on tour of the Soviet Union and Europe as a means of promoting US culture, but avant garde painting? Most Americans disliked or even despised modern art - President Truman summed up the popular view when he said: "If that's art, then I'm a Hottentot." The most popular artist after all was still Norman Rockwell, God bless him. Moreover, this was during the McCarthy era when artists and intellectuals headed the government’s lists of suspected communists. And many of the movement’s leaders – Rothko, Gorky, Newman, Ernst, de Kooning, to name just a few – emigrated from countries where socialism and communism reigned. Granted many of them were fleeing persecution but if anything that probably made them seem more dangerous. To think that the US government backed these artists, this kind of edgy art, seemed incredible.
I met a poet friend of mine for coffee, told him the story, and he said, “Yes, it’s true; the US government saw modern art as a means to fight off the commies.” Why was I the last to hear of this?
Of course, US sponsorship wasn’t altruism or prescience, that’s for sure. Apparnetly, they did it because in the propaganda war with the Soviet Union, this new artistic movement could be held up as proof of the creativity, the intellectual freedom, and the cultural power of the US. Russian art, strapped into the communist ideological straitjacket, could not compete. Pollock as propaganda. I loved it. Of course, Pollock never knew about it.
At first, government support for all such arts programs was open. Examples of government projects included an animated version of George Orwell's Animal Farm, sponsorship of American jazz artists, opera recitals, the Boston Symphony Orchestra's international touring program. Its agents were placed in the film industry, in publishing houses, even as travel writers for the celebrated Fodor guides. And, we now know, it promoted America's anarchic avant-garde movement, Abstract Expressionism.
Not surprisingly, ordinary Americans and not a few Congressman were irate at governmental backing of modern art. One upset congressman declared: "I am just a dumb American who pays taxes for this kind of trash." Doesn’t this statement sound as though cut from yesterday’s newspapers? (See my post a couple weeks ago about threatened cuts to The National Endowment for Arts).
The program went clandestine. The Central Intelligence Agency was put in charge and set up what it called the Congress for Cultural Freedom (Orwellian, yes?), and it’s ranks included a vast jamboree of intellectuals, writers, historians, poets, and artists, all of them run (without their knowledge) by a CIA agent. It was the beach-head from which culture could be defended against the attacks of Moscow and its "fellow travellers" in the West. At its height, it had offices in 35 countries and published more than two dozen literary and art magazines.
The organization put together several exhibitions of Abstract Expressionism during the 1950s. One of the most significant, "The New American Painting", visited every big European city in 1958-59. Other influential shows included "Modern Art in the United States" (1955) and "Masterpieces of the Twentieth Century" (1952). 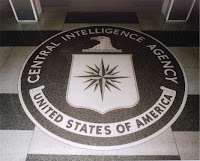 The public didn’t know about CIA backing, Congress didn’t know, even the artists didn’t know.
I’m not sure how much monetary support the CIA actually ended up providing individual artists—certainly most modern artists were poor and didn’t receive widespread recognition until either late in their careers (de Kooning, Newman) or until after their deaths (Pollock, Rothko). The CIA didn’t make Abstract Expressionism. I’m absolutely sure it would have succeeded with or without CIA support, though perhaps London’s Tate Museum wouldn’t have seen it so early. But, the CIA funds did help place modern art in all sorts of public venues -- the marble halls of banks, in airports, in city halls, boardrooms and great galleries. The CIA may have bankrolled assassinations in foreign countries, overthrown governments, sold weapons to terrorists, etc., but it also provided a dollar or two (even if with ulterior motives) for modern art. Made me feel a little affectionate.
Anyway, what I’m also wondering now is why MOMA decided to do this enormous AE retrospective now? Why now? Perhaps to remind our government how important art and its support actually are? Not just as a means of enriching each of our lives, but as a way to remind ourselves and even our enemies that we, meaning our country, supports expression and freedom in all its myriad flavors. Without that freedom, there is no true art, there is no true creativity, there is only propaganda and stagnation.  Well, maybe. Anyway, it’s a fabulous retrospective.
Posted by Sarah Wetzel Fishman at 12:52 PM